IT WAS AWEEEESOME!!!!
As soon as I sort through my pics from this weekend I will post them on Facebook, but until then, quick entry about the event + some outfit shots!

Pic with Mariko Suzuki-san (editor of the Gothic & Lolita Bible) and Mari Nakamura-san (the head desiger of Juliette and Justine) They were both so amazing, beautiful and stylish!! 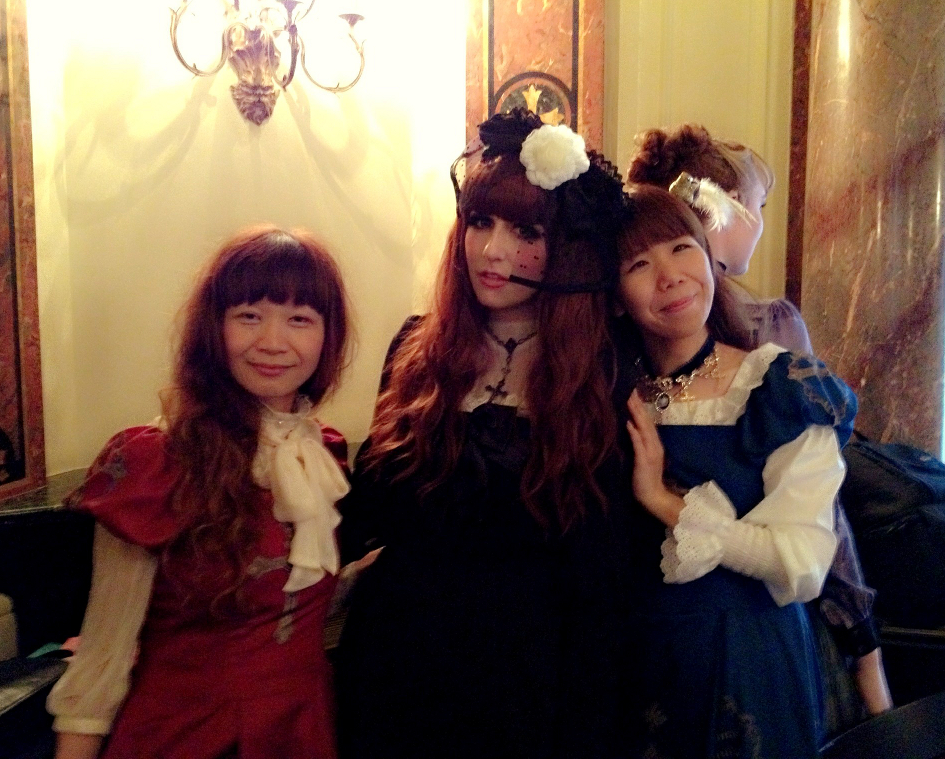 The true highlight of the event however was after many emotional thank-yous to everyone, when it was our turn to thank Kyra for organizing this massive event, Dom fell on one knee and proposed to her in front of everyone!!! No, really, this happened. We were all trying not to cry and ruin our make-up. And the next day Nakamura-san announced she will be designing Kyra's wedding dress and will be even going to her wedding. How awesome is that? How are we ever gonna top all this at the next Tea Party Club anniversary...? Is this real life even???

Anyway, here's my outfit from the first day of the event, with Phoebe who had the most amazing headdress on: 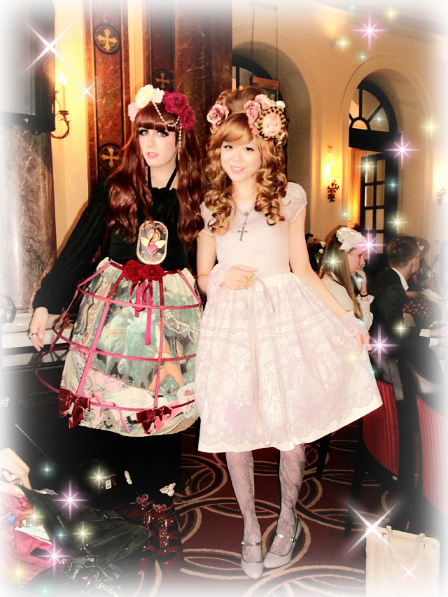 I was busy in the weeks before the event and didn't manage to make most things I was planning to. Mark made the cage skirt for me on Friday evening and I finished painting it around midnight. I had all sorts of plans about adding ribbons and stuff to it, but no time :(( (Close-up pic of print & cage skirt by Kandee Monsoon) Same with the headdress, I put it together in about 15 mins. I wanted something more elaborate, but I'm happy with the way it turned out. 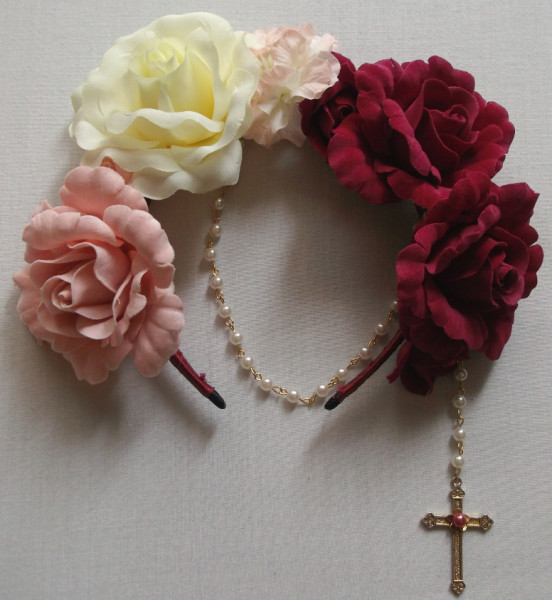 And same with the socks, I wanted to embellish them more, but this was done after midnight and I only had enough energy to sew on a few flowers and crystals. 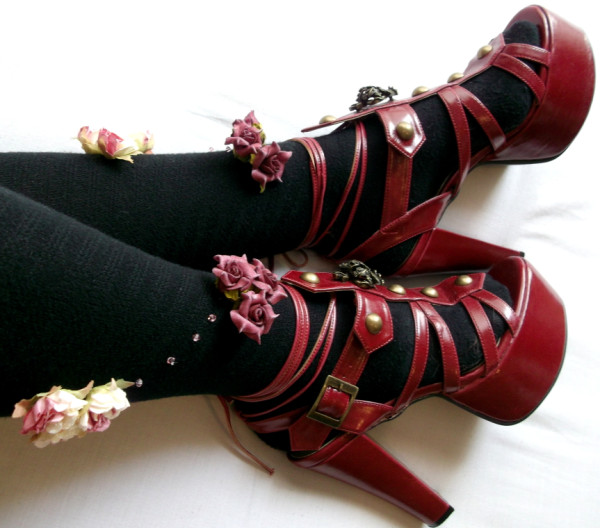 I bought this reliquary from Holy Candy on Etsy, it's meant to be displayed on the wall or on a shelf, but I just added some long ribbon to it and wore it as a necklace. 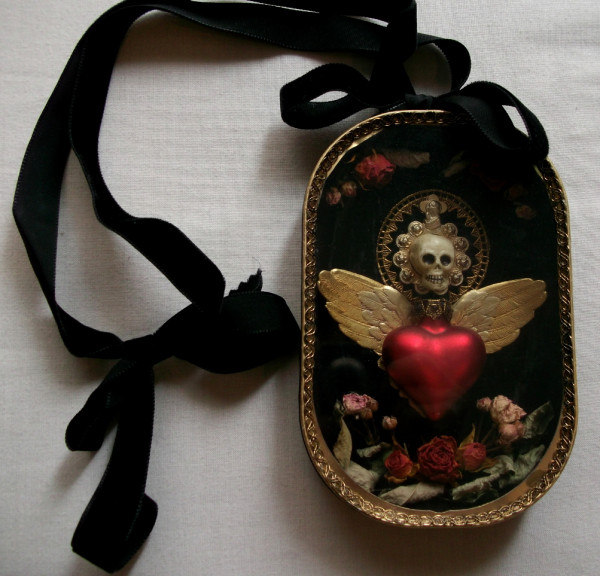 The event consisted of a Q and A with Nakamura-san, Suzuki-san, BJD creator Koitsukihime and make-up artist Akira Tanaka; an amazing fashion show with the latest collection as well as opera singers; there was a room with stalls with products from JetJ as well as many indie brand; a raffle; and tea and cake. We also had to fill in a questionaire and then give it to Nakamura-san and Suzuki-san, while they took everyone's pic so as to select people for the GLB snaps and they also presented each of us with an autographed postcard. There was also a scavenger hunt, but I missed that cause we went out to get something to eat instead. 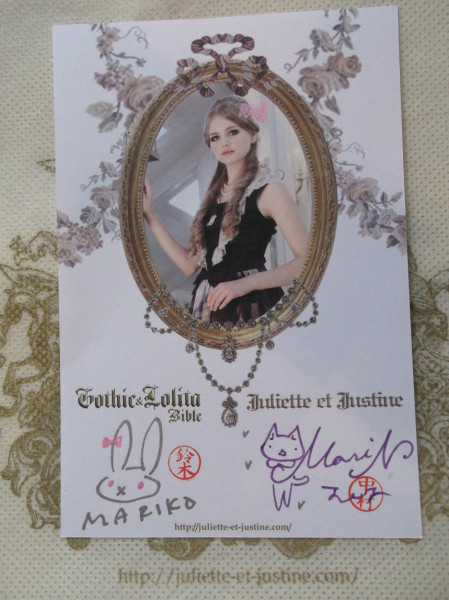 Juliette et Justine had brought many new tights designs with them but I took ages before visiting their stall, so when I got there all there was only one style left (I reaaaally wanted the cross design ;_;). But they had also brought those specially made cat print hoodies, so I got one of these, the tights and the new issue of the Bible, which came with a large poster. I got the tights on Saturday, so I was able to wear them at the Tea Party on Sunday. 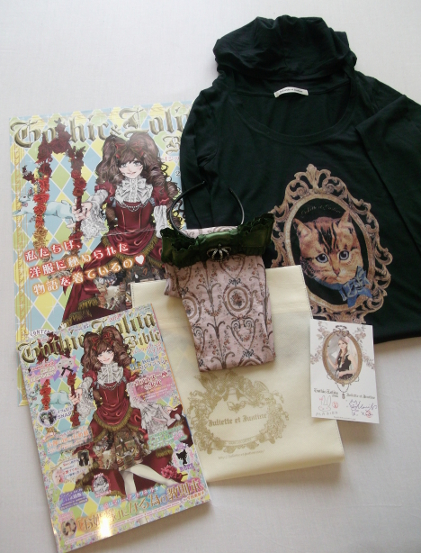 Sunday was way more relaxed. The tea party started around 2 pm so we had some extra sleep time in the morning. Everyone was given a JetJ catalogue together with a voucher for a 2000 yen discount. We all sat down to have sandwiches, pastries, scones and tea (I got a lovely vegan option, yay!!) and then there was another raffle. I won this Juliette et Justine bow. It is so gorgeous, I still can't believe I won something so beautiful: 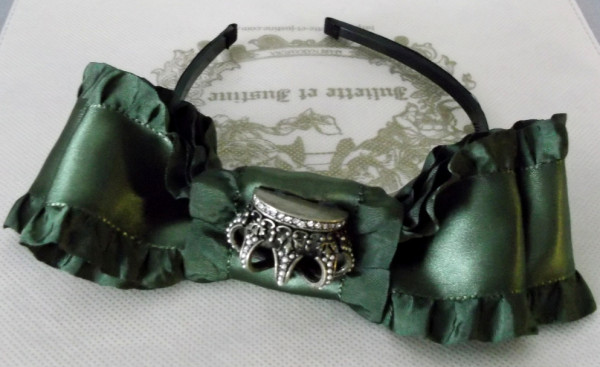 They also announced the results of the various competitions and gave prizes etc (for more info on the contests see http://teapartyclub.blog.com/). We spent most of the time chatting and then taking pictures and then head off to the afterparty for cocktails. Outfit shot with Mel: Aaand another pic with Suzuki-san (I just love her look soooo much!!): 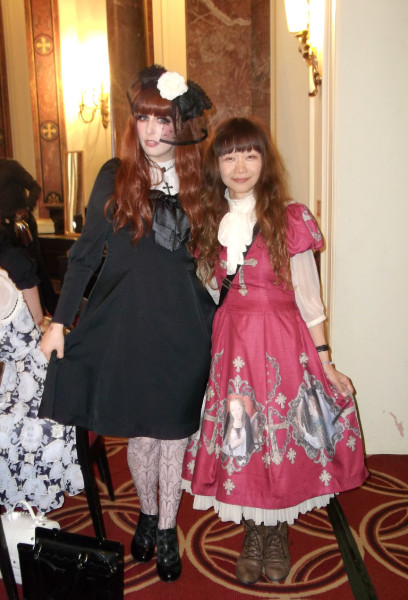 One of Koitsukihime's gorgeous dolls being displayed: 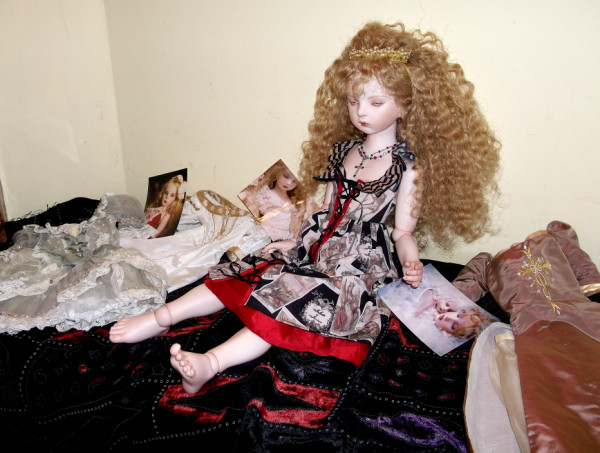 All in all it was an amazing weekend, I am so grateful to Kyra and everyone else who helped and put so much work to make this happen. It was so great to see everyone and hang out with so many awesome people and admire everyone's outfits. Speaking of people and outfits, I need to finish sorting my pics (most of which are blurry again) so that I can post everything up on FB!
xxxx